The Lands of Tékumel

To the west the Empire of Mu’ugalavyá stands as Tsolyánu’s greatest rival.

Mu’ugalavyá is ruled by four ‘Palaces’, each of which governs all aspects of life within a specified geographical area, or ‘Province’. The central government is an oligarchy based in Ssa’átis formed of the four ‘Princes’ (Dü’ümünish), representatives of the priesthoods, and certain senior clan-heads. Each of the Princes is in command of the Legions raised and posted in his region. The red-lacquered troops of the Four Palaces of the Square, as the government is called, stand guard upon their borders facing the blue-clad Tsolyáni legions on the summit of the opposing Sákbe Road, hoping to one day regain the lost Cháka Protectorates.

The Mu’ugalavyáni are 1.5-2cm shorter than Tsolyáni norms and more brachiocephalic; with rather flattened hook noses, wide features, and coarse, straight black hair. Their eyes are sometimes grey, and their colouration is lighter. 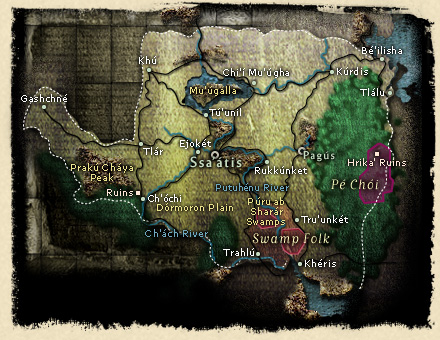 The religion of Mu’ugalavyá is similiar to that of Tsolyánu, though Vimúhla is prevalent amongst the Gods—his temples are wealthier, and his clergy receive preferences. The noble clans also venerate another divinity: the beast headed Hrsh, whose primary shrine lies on the forbidden island of Mu’ugallá. It is not known whether Hrsh is another great interdimensional being, or an amalgam of Vimúhla, Karakán, and possibly Ksárul.

The Tsolyáni see them as humourless blockheads, hopelessly stolid and unimaginative, set in their bureaucratic ways. However they are also known to be stiffly correct, honest, and ‘noble’.