The first ‘test’ figure was that of General Kéttukal (left). This figure is based on illustrations from the Wargamer’s Digest, March 1976 article The Battle of Ry.

The intent is to produce a small range of Tékumel miniatures based upon the forces involved in the last war between Yán Kór and Tsolyánu. The figures are being based on the illustrations in the Armies of Tékumel books available from Tita’s House of Games

and from consultations with Professor Barker where information is scarce. If the range shows signs of interest it will be expanded to meet the demand.

The initial production plan calls for a complete selection of officers and soldiers from alternating Tsolyáni legions and Yán Koryáni Gureks. The first legion will be General Kéttukal’s own ‘First Legion of Ever-Present Glory’. The second production release will be the Yán Koryáni ‘Gurek of Tleku Miriya’. Note that because of the many diverse troop types within the Yán Koryáni formations, they must necessarily be spread out over multiple releases. These releases will be followed by the ‘Legion of Serqu, Sword of the Empire’ and the second part of the ‘Gurek of Tleku Miriya’.

This section will be kept updated with images and information direct from the creators of this exciting new line of Tékumel miniatures.

Eureka has made available their 4th release. Two more gureks for Yan Kor: the Valiant of Ke'er and the Turquoise Eye. Also included are the Lord Fu Shi'i and a Mihalli. These latter figures are based upon the descriptions in the novels. More detail here 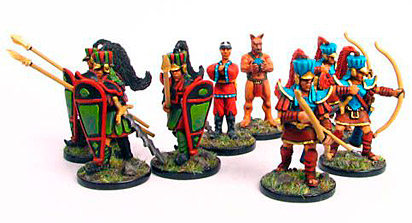 Some more shields and weapons for future Yan Koryani gureks: The Gurek of the Clan of the Silver Worm, The Gurek of Defense Against Evil, and The Gurek of Nitkambo of Rulla. 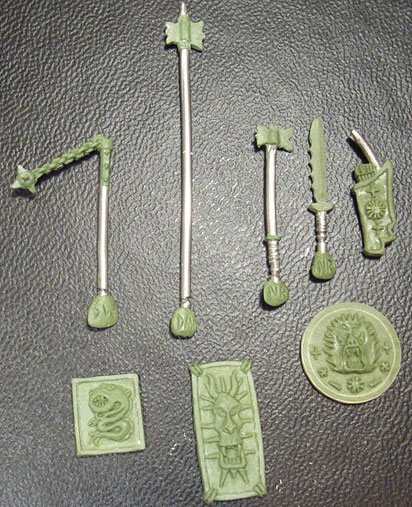 Download the PDF catalogue for the third Eureka Miniatures Tékumel release, the first of the Yan Koryani—the Baron Ald and the Gurek of Tleku Miriya.

Note that the large ‘lightning sword’ that accompanies some of the figures in this release is very long, essentially a bastard sword. It can be shortened easily by trimming either one or two of the zig-zags from the blade, simply cuting across the blade at the desired point. This provides the player with more options and allows him to increase the variability of his units.

Below are some pictures of designs for standards and shield designs.

The first of the Yan Koryani will be released in June. 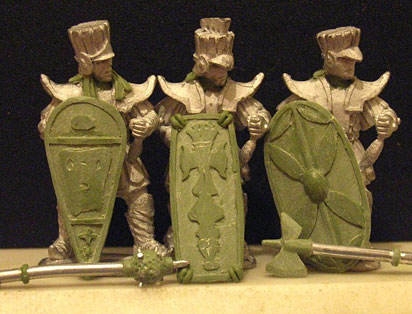 The shield designs are taken from various illustrations. They are intended to be used one design per Gurek. From L to R: Ke’er, the Turquoise Eye and Tleku Miriya. 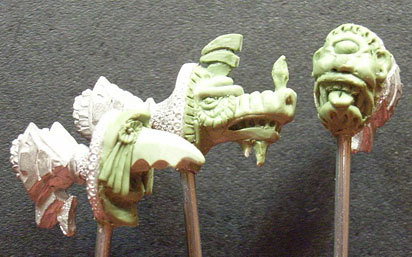 Planned for release in late April. 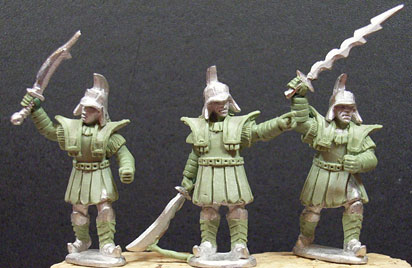 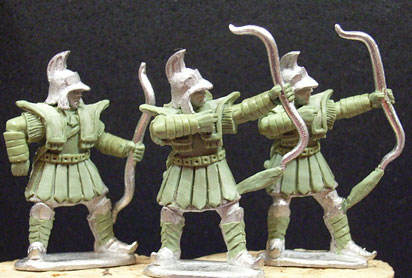 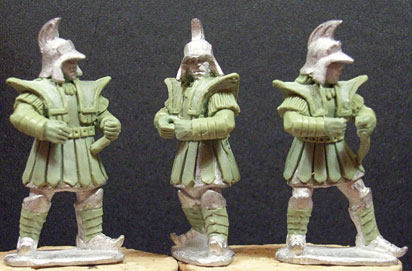 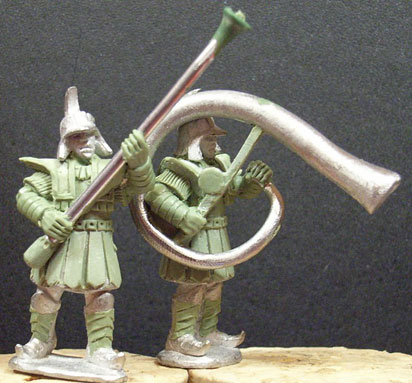 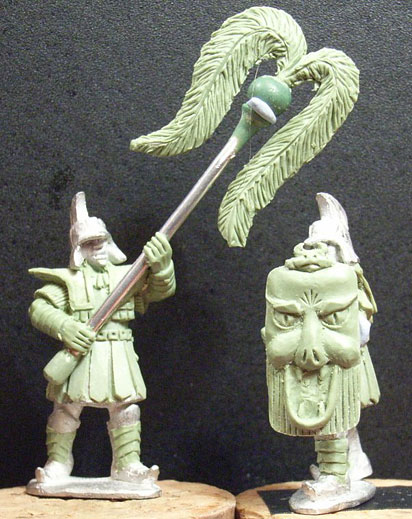 Here are pics of the upcoming Yán Koryáni figures. The first shows a Tleku Miriya crossbowman with his large, demon-faced, pavise shield; behind him are two longbowmen. The second picture shows another couple of archers in a different pose plus some Yan Koryani command figures. The third shows a male and female crossbow plus the standard and various plumes. The archers, crossbows and standard are all blanks. The troopers will get the same head swops as the regular infantry, while the standard will receive a different ‘face’ for each Gurek. We are hoping to release the two Gureks of Tleku Miriya in April 2007. The release will include Command, and both Heavy and Medium infantry. The Legion of Serqu is slated to be released at the same time for the Tsolyáni. 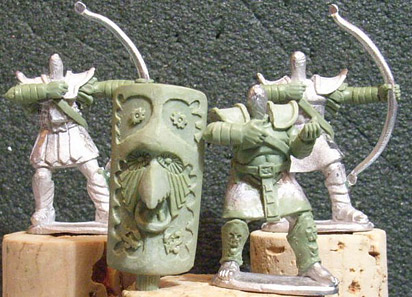 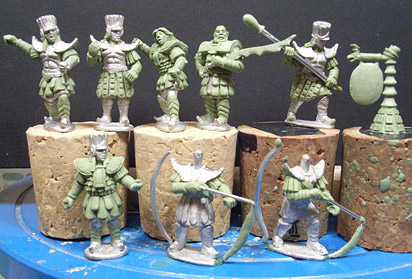 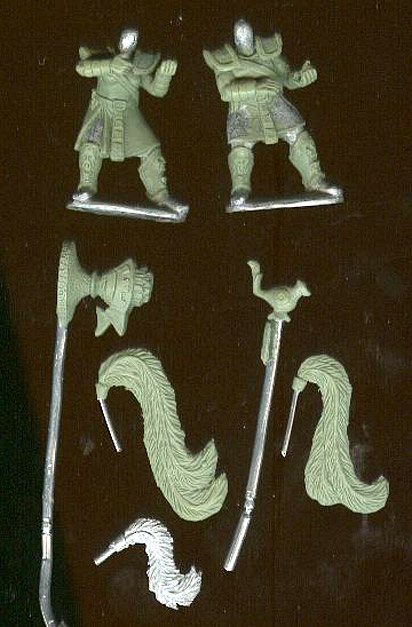 Here is a first look at the blanks made for the Yán Koryáni medium and heavy infantry. These include head variants that will allow production of a wide variety of figures. The poses cover all the weapon types indicated in the Yán Kór army book.

Also included are pics of the Hláka blank and two Shén blanks. Note the correction made to the nostril in the second pic. 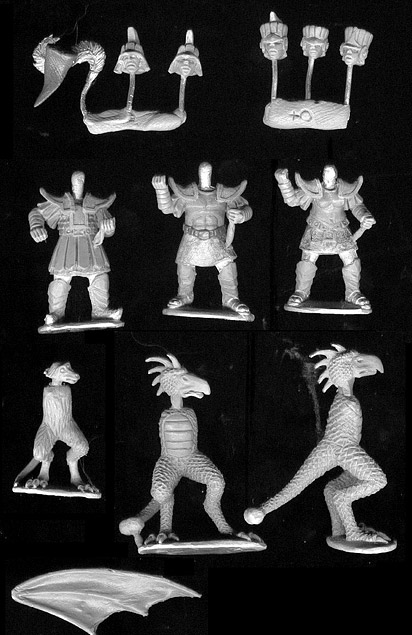 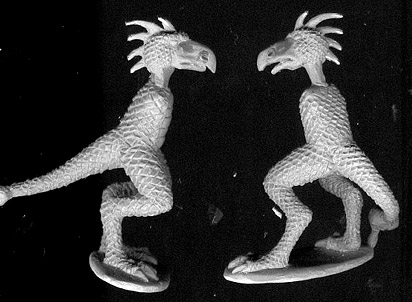 These will comprise the first release. All EPG figures will have swords and helmet plumes included. The Spearmen will also have shields as will the advancing officer (trim the scroll to use the shield.) The spears for this legion are not that fancy to judge by the army book illustation; thus, it is intended that wire be used. The wire is not included. All figures are of course unpainted. 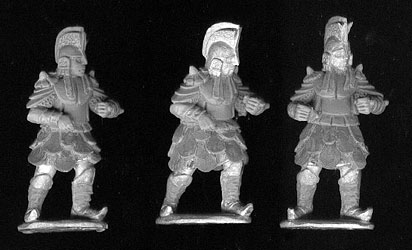 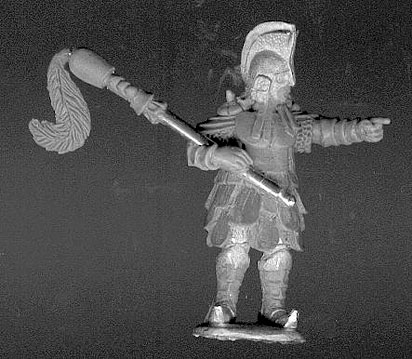 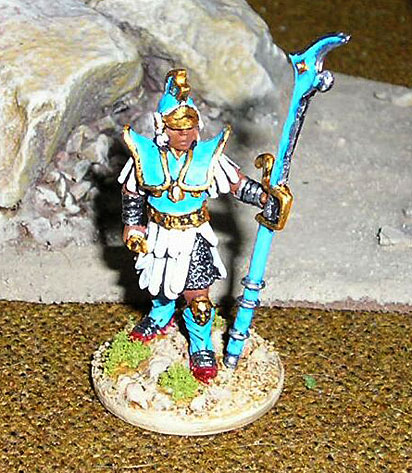