Lord of Wisdom, Knower of Arts, Hidden Seeker of Eternal Knowledge, Sage of the Gods 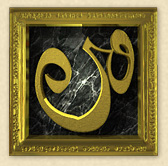 Thúmis seeks total wisdom, cognition without the limitations of the ego, and an understanding of the universe in order to serve the eventuation of Hnálla’s Changeless Radiance.

Thúmis aids those who seek knowledge for the benefit of society; and who heal, teach and study.

His commonest depiction is as a seated scholarly man with a golden halo and a book-roll in his hand. Some of his Aspects bear the traditional Staff of Power (although Thúmis was not worshipped until Engsvanyáli times), and the hem of his robe is blazoned with stylised eyes, signifying omniscience and wisdom. His sign is a square in which the Tsolyáni letter for ‘th’ is centred. He has 47 common Aspects, and his clergy (both males and females) wear grey robes and simple black skullcaps.

The Temple of Thúmis is dominated by the Brotherhood of Supernal Wisdom, which holds that Stability must triumph through the acquisition of knowledge, strong political action, and even missionary zeal—but not through violence. Smaller factions within Thúmis clergy argue that the temple should adopt a more militant stance, while still others urge no involvement in political life whatsoever.

The Cohort of Thúmis is Keténgku: the Many-Eyed, Knower of All, Master of Scrolls. He is ‘Wisdom Applied’: patron of scholars, physicians, apothecaries, scribes, architects, engineers, and all those who use knowledge for the benefit of society. He is represented as a bald, seated scribe holding a book-scroll open upon his knee. He has four faces looking in each of the four cardinal directions, signifying his omniscience; his symbol is a stylised silver eye, and he has 27 Aspects.