Green-Eyed Lady of Fleshy Joys, Mistress of Demons, and Obsidian Princess of the Damned. 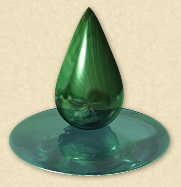 In many ways this Goddess is the antithesis of Sárku. She seeks the existential reality of the Now—changes as they occur at every moment, and the pleasures and pains of sense perception. She desires to attain the heights of ecstasy, the depths of sensuality, and the purely egotistic joy of perceived experience. She is the ultimate hedonist who cares nothing for others or for the ‘good’ of society. Only the self matters, and although she follows Hrü’ü in seeking ultimate Change, yet she must savour every moment along the way.

The depictions of Dlamélish are varied: a wanton maiden, an Aridáni warrioress glorying in the sensual pleasures of carnage, a bestial, obese human female with a head like a sort of monstrous crocodile, etc. Her insignia consists of an emerald green drop falling into a silver oval. She has 101 Aspects, plus some others which are known only to the inner Circles of her temple, it is said. Her priestesses dress in revealing and lascivious robes of emerald green, wear tiaras of silver, and hang tiny silver bells from their wrists and ankles. Her priests defy description: dissolute youths, depraved old men, capering legions of the perverted, ox-like young men who serve at her orgies, etc., all in some variation of her emerald and silver livery.

Her temples are divided into several small factions: some are devoted to her rituals and the service of the Demons (eg. the Order of Argent); others desire only to practice her hedonistic sensualism (eg. the Society of the Emerald Radiance); and a few (eg. the Society of the Emerald and Silver Crown) are activists who work with their counterparts in the other temples of the Change—or even with Avánthe’s Girdle of Purity Society.

The Cohort of Dlamélish is Hriháyal : the Dancing Maiden of Temptation, Harlot of the Five Worlds and Mistress of the Thirty-Two Unspeakable Acts. She is the supreme orgiast, patroness of the ancient Mysteries which date back to Bednálljan times, and patroness of gambling. She is pictured as a voluptuous dancing maiden holding a curved dagger; her emblem is a vertical silver oval with a wavy emerald line drawn horizontally through it. She has 34 known Aspects, and perhaps several more venerated by her Inner Temple.