Ancient Lord of Secrets, Doomed Prince of the Blue Room, Master of Magic and Sorcery. 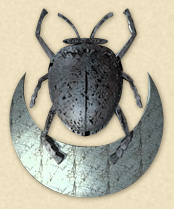 Ksárul seeks knowledge, like Thúmis, but for the Doomed Prince wisdom has no meaning in the abstract, nor is it to be used for the benefit of society. Knowledge is power, and power is the individual’s greatest instinctive goal. Indeed, if a society is to exist at all it must be for reasons of individual aggrandisement, and the ultimate final ‘good’ is the victory of Ksárul. His godhead must continue even after the Final Change to be wrought by Hrü’ü. Magic, science, technology, and wisdom are all means to this end.

Ksárul is shown as a young man of slender build with a smiling, yet emotionless face, dressed in black velvet and carrying a staff topped by an azure beetle. His emblem is this same beetle over a pale crescent moon. He has 62 Aspects. Priests of Ksárul wear black robes, smiling masks of silver, and squarish mortarboard-shaped headdresses of black velvet. His priestesses are similarly attired, but their masks are of black wood for doctrinal reasons.

His temple has three major factions: the dreaded Ndálu Clan, which seeks power through political intrigue; the Society of the Blue Light, which gathers knowledge for its personal and collective power; and the Reflugent Blue Curtain Society, which keeps its wisdom secret until it can be used to return Ksárul to supreme authority over the Gods.

The Cohort of Ksárul is Grugánu: Knower of Spells, Black Sword of Doom, and Reader of the Incantations of the Dark. He combs the Planes for knowledge and sorcery which may aid his Lord, and aids Ksárul’s followers in their own quests. He is shown as a hulking anthropoidal half-human figure concealed in black draperies, and with a head like a small buzzard or serpent. His emblem is an open hand with claw-like fingers outspread to seize or strike. He has 27 Aspects.